It’s that time again. Less than 6 months after the previous release, Dark Rages, we’ve got a new Nightfall expansion, Crimson Siege. As with the previous release, this is an expansion only and requires a copy of one of the base games to be played. If you have not played the base game yet then I recommend that you read our review for the base Nightfall game first as this review is only going to cover the new things from the expansion. As with previous expansions, Crimson Siege adds 4 new cards of each colored moon (2 actions and 2 minions of each color). In addition there is a new summon deck with a set of various ghouls. 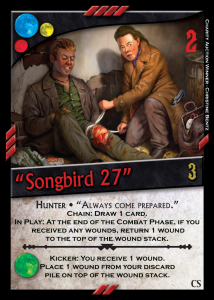 Each new expansion for Nightfall has added at least one new mechanic and Crimson Siege is no different. The new mechanic this time is Summoning. When a card effect says to Summon X (where X is a number, usually from 1-3) the player draws the top X cards from the Summon deck and immediately places them into play. When these summoned creatures are destroyed or discarded they are placed back at the bottom of the summon deck. This can be a really quick way to get multiple creatures into play.

The summon deck itself consists of ghouls of varying strengths and health. None of these summoned creatures has any special abilities; they are simply extra strength for attacking/defending. I would have liked to see a little bit more variety in the summon deck but perhaps this is something that can be expanded on in the future. As it stands now the cards from the summon deck are all a bit too similar.

Honestly, I am not quite sure what the intention was with the summoning mechanic other than to simply have more creatures in play at any given time. I always felt that not having tons of creatures in play was a strong point of Nightfall, but if more creatures in play for larger battles was something that you wanted from the game then this mechanic is perfect for you. I will say that in one of our games we happened upon a situation, which may not be incredibly common but is still possible with the summon mechanic, where one player was able to summon enough creatures in one turn to put out around 25 damage in one combat phase (which took us from about halfway through the wounds to ending the game in one combat). I had never seen anything quite like that prior to this expansion. Whether this is a good thing or a bad thing I will leave up to you as I am still a bit torn on whether combos like that are a good thing or not, though it was definitely an interesting thing to see unfold.

My other concern at this point is bloat within the rules with all the new mechanics from the expansions. I don’t think we’ve quite hit the point where all of the new mechanics are too much yet, but with the quick releases and at least one new mechanic per expansion so far I can see it hitting that point quickly if they continue this pace. Adding new mechanics is certainly not a bad thing, but I realized when attempting to explain the game to a new player with all the expansions that there were just a ton of things to deal with at this point past the base rules (Avatars, Moon Phases, Summon, Feed, etc). Hopefully this is something that they have taken into account for future expansions. I wouldn’t mind seeing some expansions with just new cards and no new mechanics to deal with.

Despite the above concerns, this expansion is still a lot of fun. One thing I noticed was that it seemed like they made much more of an effort to give the different colors a theme. The blue cards, for example, all have some sort of card draw mechanic on them. I hope that they continue down this path as it would be nice to be able to identify a theme between the different colors as I think that would make it a bit easier to plan out a strategy. 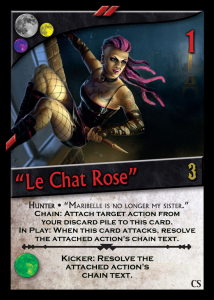 There are also some very interesting cards in this expansion with new effects as well. One of my personal favorites is “Le Chat Rose” which allows you to attach any action from your discard pile to her as her chain effect then whenever she attacks you get to resolve the attached action card’s chain text (and the kicker allows you to resolve the attached card’s chain text immediately). Even if the summoning mechanic is not something that holds a huge interest for you this expansion has plenty of interesting non-summoning cards in it as well.

If you have the previous expansions already I would definitely recommend picking up Crimson Siege. If you do not already own Dark Rages I would recommend picking that up before Crimson Siege as I found it a lot more interesting overall and the Avatar mechanic adds a bit more strategy than the summoning mechanic. At the $29.99 price point, though, you’ll definitely want to add this to your collection at some point for some of the interesting new cards.


This entry was posted on Saturday, November 3rd, 2012 at 11:35 am and is filed under Board Games, Reviews. You can follow any responses to this entry through the RSS 2.0 feed. Both comments and pings are currently closed.