It’s been a while since I’ve talked about any Kickstarter projects, so I thought I would put up one I have been obsessed with lately. This isn’t technically a tabletop game, but has roots in tabletop gaming. Hex, the MMO TCG, is a Kickstarter from Cryptozoic (who are the minds behind the World of Warcraft TCG and the Penny Arcade deck-building game, among others). It is a digital trading card game very much in the vein of Magic: The Gathering. 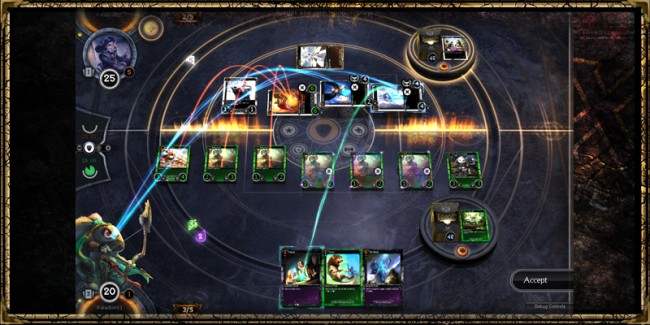 The gameplay of Hex is something that will be very familiar to any Magic: the Gathering player, in fact, as each player has 20 life, a hand of 7 cards, and is playing creatures and spells to lower their opponents life to 0. The combat system in Hex plays out much the same as you would expect. There are some differences though. Some cards have gem slots and can be socketed with a gem to change the text on the card. Also, resources work a bit differently in Hex. Instead of land cards that stay in play and are used to generate resources when a resource card is played it adds to the player’s threshold values, resource value, and charge. Cards have a cost in resource points as well as a required number of threshold of a certain type (threshold is not a cost so it is not spent, it’s just required to have a certain amount to play that card). The charges are used to activate special abilities of your champion. 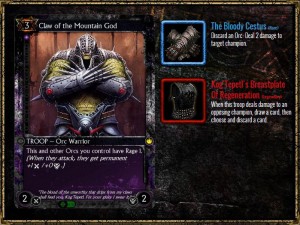 This is where things start to get really interesting, I think. When you play a game of Hex you have your deck but you also have a champion representing your character. This champion has a set of special abilities ranging from passive skills that modify things that happen in game to special cards to a charge ability that can be activated by paying a certain amount of charges for a special action. One of the examples we’ve been shown is a charge ability that costs 3 charge and allows the player to draw a card in exchange for losing 2 life. The abilities of your champion is going to make for some really interesting choices in building decks, I think.

The other big thing in Hex is the addition of a PvE element. Players will be able to complete solo and group (up to 3 people) encounters against special AI decks along a storyline while leveling their champion up. There are also specific PvE cards that can only be used in decks built for the PvE section of the game. In PvE the player can also add equipment to their champion that modifies the effects of certain cards. Each equipment fits into a specific slot on the champion so you are limited to only a few pieces. You will be able to earn new equipment through completing the PvE dungeons and raids. 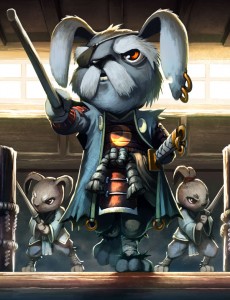 One other thing worth mentioning is the world of Hex. Cryptozoic has created a brand new IP using some familiar fantasy elements such as elves and undead but they also have some interesting original stuff. For example, the Shin’hare are a race of rabbits with a lot of feudal Japanese elements while the Coyotle are a race of coyotes with a Native American theme.

Overall Hex is something I am very excited for. The game will be free to play (you get a free starter deck and can earn cards through playing) with the option to purchase booster packs at $2/pack (15 cards) which is cheaper than most TCGs. There will be tournaments (including draft tournaments) as well. I highly recommend checking out the Hex Kickstarter and the official Hex website for more information including videos showing off the gameplay. As of this writing the Kickstarter has achieved more than 400% of it’s goal with almost 2 weeks remaining. It’s well worth jumping on the Kickstarter due to all the great rewards Cryptozoic is giving out.

This entry was posted on Friday, May 24th, 2013 at 8:49 pm and is filed under Uncategorized. You can follow any responses to this entry through the RSS 2.0 feed. Both comments and pings are currently closed.

One Response to “Kickstarter: Hex, the MMO TCG”