I previously wrote about the Kickstarter for Hex: Shards of Fate. Hex is a digital TCG that will include both a traditional PvP mode to play versus your friends (or random people across the world since it is digital) and a PvE mode where you can play with up to 2 other players cooperatively against various encounters and dungeons. Well, I’ve got my hands on the alpha now so I figured I would share how it is coming along. 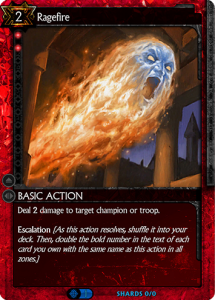 First of all, this is definitely an alpha. What we currently have is 4 copies of every available card (most of the PvP set, but still missing about 70 cards from the first set for launch), a basic deck builder, and a way to challenge other players in a basic lobby. The PvE elements are not in, drafting is not in, the auction house is not in, and actually collecting cards is not in yet. Despite all of this I am having a ton of fun with it already.

For anyone familiar with Magic: The Gathering (MTG) the rules of Hex will feel very familiar and easy to pick up. The basic rules and turn structure are essentially the same. However, this is not just a clone of MTG and that is already apparent in the alpha. I have already seen some crazy decks built around the escalation mechanic (when you cast a card with escalation every copy of that card in your deck doubles in strength, then that card is shuffled back into your deck). I have also seen some interesting decks using similar mechanics such as The Ancestor’s Chosen or Pack Raptor.

In general, the pacing is a bit different thanks to the resource mechanics. In Hex all of the resources you spend are colorless. However, you also have threshold for the various resources which are not a cost but simply a value you have to meet before being allowed to cast a specific card. For example, a card with cost 4 and threshold 2 Wild would require you to have 2 Wild threshold before you could attempt to cast it and would cost 4 of your resources but this does not use up your threshold and you can cast as many Wild cards requiring 2 or less threshold as long as you have the remaining resources to play them. This resource system works very well so far and creates a lot of interesting options for players both in how to play and in deck building. 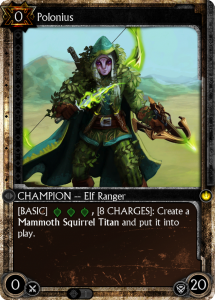 Example of a Champion

The other big thing in Hex is your champion. When building a deck you choose a champion to accompany the deck and each champion has a different charge power. Generally you get charge points every time you play a resource (though there are a few cards that can get you more charge points). The abilities vary from being able to draw a card to giving your troops attack/defense bonuses to creating a new troop and putting it into play. This adds a very interesting strategic layer to deck building that I really love. It also ensures that if you are drawing tons of resources you still have interesting things to do. In my time building decks I’ve found the champion powers to really tie the whole deck together.

The fact that I have had so much fun playing in what is just an early alpha that is missing most of the big features really bodes well for Hex. I am very excited for the future of this game. I can’t wait until drafting is implemented as I really enjoy the strategic aspects of drafts as well. The PvE aspects are also looking to be very interesting based on the various articles and interviews we’ve seen so far.

I have been streaming Hex on twitch for anyone who is interested in seeing the game in action. Just follow me there and look for me to be streaming. I have also put up a couple of highlights from my time playing and I’ll likely continue to add more as I stream. If Hex is something that interests you then check out the Hex page as it is still possible to get in on the alpha with a Slacker Backer donation.


This entry was posted on Friday, October 18th, 2013 at 1:50 pm and is filed under Board Games. You can follow any responses to this entry through the RSS 2.0 feed. Both comments and pings are currently closed.