The Lord of the Rings: The Card Game Review 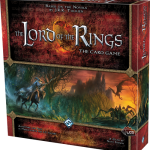 We generally focus on miniatures games here at Tabletop Geeks, but that is not all we play. Just recently I stumbled upon the Living Card Games (LCG) from Fantasy Flight Games. Being a huge Lord of the Rings fan I had to pick up the Lord of the Rings: The Card Game LCG to try it out. So far I am absolutely loving this game.

If you are not familiar with Living Card Games they are similar to a Collectible Card Game (CCG) in many ways with one really large difference, you are not going to go broke collecting cards. This was really the first thing that drew me to this game. Ever since I gave up on collecting Magic: The Gathering cards many years ago I have been wanting something that could bring the same enjoyment without forcing me to spend thousands of dollars to get the good cards. With a Living Card Game you simply buy a set that includes ALL of the cards for that set, all at a very reasonable price.

In fact, the core Lord of the Rings LCG game is priced at only $39.99 (though it can be found even cheaper at Amazon) and comes with everything you need to play, including 226 cards and all of the counters and tokens you need to play. The “Living” part of Living Card Game comes into play in the frequent expansions that are released. These 60 card expansions retail for around $15 and include all of the cards from that set, as opposed to a booster pack from a CCG which costs about as much and only gives you a few random cards from a set. These expansions are completely optional of course, but can certainly extend the life of the game.

As for the game itself, I have to say that I have been very impressed. The game is very easy to learn, but includes quite a bit of depth already with just the core set and no expansions. The game includes 3 unique quests to start with, each with a good bit of re-playability due to the random encounter decks. If you have ever played a CCG then you will be right at home with most of the concepts. If you have never played a CCG, do not be intimidated as this is very easy to pick up and the website includes tutorial videos that do quite a good job of explaining the basics of the game.

A game in progress

The other major part of the game that intrigued me from the start was that the fact that The Lord of the Rings LCG is a cooperative game instead of a competitive game. The players work together against a quest and encounter deck to complete a scenario instead of playing against each other. This also means that it is entirely possible (and actually quite fun) to play solo!

Each player has his own deck (either constructed by the player or a “starter” deck listed in the rulebook) and 3 heroes. The gameplay occurs in 7 rather simple phases that make up a round which players play simultaneously. There are Starting/Ending phases that include the cleanup and upkeep between rounds and then there are 5 major phases of play, including Questing, Traveling, and Combat. 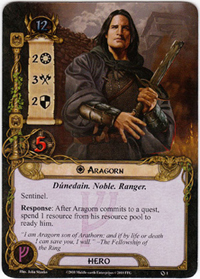 The players start out by playing cards from their hand, such as allies (which work alongside your heroes for questing and combat), attachments, or events. The players are then tasked with sending heroes and allies questing against the encounter cards in the staging area in order to attempt to progress through the current objective. After questing players may then travel to a location (which consists mainly of resolving a travel effect found on the card) before moving on to combat. Players can choose to engage an enemy in the staging area, or if a player’s threat is high enough an enemy may engage them. Combat consists of first defending and then attacking (comparing attack and defense values, and any modifiers and then assigning damage). Unlike most card games you do not defend and attack back with the same character, but rather choose characters specifically to defend and then choose characters with which to attack.

Players must balance their questing with combat (and within combat must balance defense and offense) in order to steadily progress through the current quest until completing all phases. Players are also on a sort of time limit due to the threat counter that is steadily increasing. A player is eliminated if his threat counter reaches 50 OR if all 3 of his heroes are defeated. If one player manages to complete the final stage of the quest then all players win the game. There is a scoring system in place that will give you an idea of how well you did on the quest as well. This all may seem a bit daunting at first, but in the games I played all players picked up the flow within only a round or two.

Another nice feature is that the game scales with the number of players. During the questing phase players will flip 1 card for each player in the game, so more players means more encounters to deal with. After having played games with 1, 2, and 3 players this seems to work fairly well and keeps the game from being too difficult with fewer players or too easy with several players. 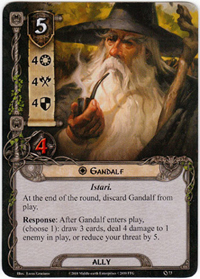 Once players are familiar with the basics of the game they can move onto deck building. Player cards consist of cards from 4 spheres of influence (Leadership, Spirit, Lore, and Tactics) and also neutral cards with no sphere. Each hero is tied to a sphere and produces resources of that type that can be used to play cards from that sphere (neutral cards can use any resource type). Players may then mix and match cards and heroes from various spheres to build their own custom decks and come up with their own strategies. You can use the scoring system to determine how well your custom deck fares, and continue to refine while trying to lower your scores.

You can even track your scores on the website. Fantasy Flight games has put up a Quest Log on their website that allows you to input data from your games and track them. You can enter the heroes you played, the adventure, your score, number of players, and add some notes as well. You can use this to share your scores with friends or to just keep track of your various scores.

One last thing that I feel is worth mentioning is the quality of the pieces. The tokens and threat counters are not cheaply made. It is clear that some though was put into making pieces that will last. Each piece is a thick quality cardboard with a sealing coat that will make them last for quite a while. I would not even normally mention this but I was very impressed with the quality of everything when I first opened the box.

Overall I can not say enough good things about The Lord of the Rings Living Card Game. I highly recommend that anyone check this game out. It is easy to pick up and learn and it has all the fun, strategy, and deck building of a CCG without all the expense. The expansions will give you plenty more deck building options and new quests to keep the game fresh and exciting at very reasonable prices as well. On top of it all you can play the game solo or with several friends. I’ve been sharing this game with friends and they all love it (see one of my friend’s thoughts after I showed him the game over at Living With a Nerd). 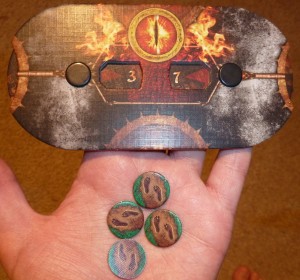 
This entry was posted on Wednesday, June 29th, 2011 at 10:03 pm and is filed under Reviews. You can follow any responses to this entry through the RSS 2.0 feed. Both comments and pings are currently closed.

One Response to “The Lord of the Rings: The Card Game Review”