I have been spending a lot of time on Kickstarter these days checking out the interesting projects people are putting up. I’ve found there is a large amount of board games and card games with interesting ideas popping up there, so I though I’d start sharing the ones I find intriguing. I’ve backed a handful of projects so far and I plan to continue backing more. 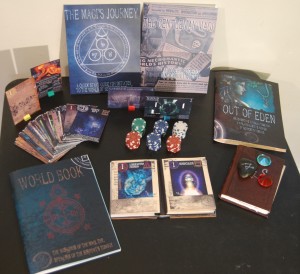 One of the most interesting projects I’ve seen so far is Serpent’s Tongue. I am not quite sure how to categorize this game as it feels like it pulls elements from various sources including card games and pen and paper games. Each player has a codex (an actual hardbound book) that holds all of their 33 incantations (4×6 “cards”). There are dozens, if not hundreds, of cards to build your codex from which gives this the feel of building a deck in a CCG. Unlike a CCG though, players do not shuffle their incantations; they always have access to all of the incantations in their codex.

Players take turns casting incantations which consists of the player having to do the appropriate hand gesture and say the correct phrase in order to cast the spell. The front of the card has a special code that a player can decipher or they can memorize the incantations, while the back has a picture of the gesture and the phrase so the other players can tell that you did it right or not. There are a few game types including free for all and team competitions where you must do enough damage to defeat the other players/team but there is also a cooperative campaign included as well.

Ground floor is an interesting take on the worker placement/resource style board games. Players take control of a new business and must build it to be the best business they can from the ground up. You allocate our your workers to various tasks each turn in order to do things such as gather info or make money. If you are into resource management games it is worth checking this out.

Defenders of the Realm: Battlefields 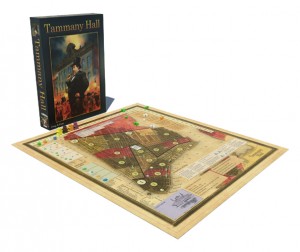 This game has technically already been released, there was only a limited number of release of 500 copies. Tammany Hall is a game of backstabbing and corruption. Players compete for power in New York City by helping immigrants settle for political favors, securing votes, and slandering opponents. I have to admit that after reading up on it I’m still not quite sure how it plays but the whole idea has me very intrigued, especially since it appears to be a sort of resource game with more direct competition between players. I highly recommend looking over the page for this one.

Disaster Looms is a hex based game in which players build the board during the game from various hex tiles. The basis of the game is that earth is being destroyed and everyone must be evacuated. Players compete to build colonies, save colonists, and earn money. There is also an interesting layer of the game in which each player has their own various technologies that affect the game and other players are able to use these by paying that player. I am personally a fan of games in which the board is built throughout the gameplay because it tends to keep the game interesting through many plays. 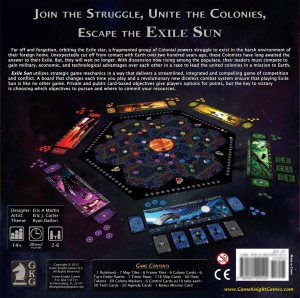 Finally, we come to Exile Sun. The Kickstarter for this game has actually already ended, but I wanted to post about it anyway because I backed it and will be reviewing my copy when it shows up soon. This is a space themed game in which players complete various objectives for points. There are a lot of elements to Exile Sun, but the one element that intrigued me was the combat system. Players secretly assign power to offense/defense for ships in 5 different slots in attempts to destroy the opposing player’s ships in each slot by overpowering the defense in a slot by having more offensive power assigned to that slot. This is an interesting game of strategy as players pick which ships to use in battle and then have to outsmart their opponent through strategic assignments of power. Keep an eye out for a full review of this game hopefully in July or so.


This entry was posted on Sunday, May 6th, 2012 at 6:29 pm and is filed under Board Games. You can follow any responses to this entry through the RSS 2.0 feed. Both comments and pings are currently closed.

One Response to “Interesting Kickstarter Projects #1”