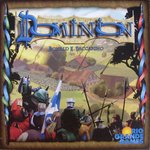 We have recently discovered the relatively new genre of deck-building card games. If you are not familiar with the genre the name might conjure up thoughts of Magic: The Gathering or other CCGs. However, the deck-building genre is something very different. Instead of building a deck of cards and then playing a game with that deck the game itself is building your deck by purchasing cards each turn, not to mention the entire game comes in one box so there is no card collecting. We have tried out many different deck-building games recently, but I am going to start by reviewing the game that started the genre, Dominion.

The first thing that you need to know is what the cards are:
Treasure Cards are the currency with which players are able to buy new cards.
Victory Cards have no value during the game, but are worth victory points towards winning the game.
Kingdom Cards are the action cards which players purchase during the game. These cards have a large variety of functions allowing players to do things such as draw more cards, take additional actions, purchase more than additional cards on their turn, or even force other players to discard cards. 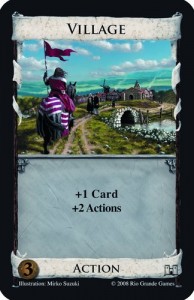 The Village card allows the player to draw 1 card and play 2 more actions.

The general formula behind Dominion (and for most games in the genre) is fairly simple. The goal of the game is to have the most victory points in your deck when the game ends (which occurs when the Province cards are all purchased or when any 3 supply piles are empty). Each player has their own deck of cards to draw from that starts as 10 cards: 7 treasure cards and 3 victory point cards. There are also several piles of cards in the center of the table, called the Supply, which is where players will purchase new cards from. A player’s turn consists of 3 simple steps performed in order: play an action card (optional), buy a card from the supply and place it in your discard pile (optional), then discard all cards in play and in your hand and draw 5 new cards (reshuffling your discard pile into a new deck if necessary).

Cards are purchased using money earned from Treasure cards in the players hand (and also some Kingdom cards that give extra money). Through purchasing new cards each turn the players are each continuously customizing their deck the whole game. The cards available for purchase in the supply consist of 10 different Kingdom cards (chosen by the players or randomly selected from all available cards), more Treasure cards (Copper, Silver, and Gold worth 1, 2, and 3 money respectively), and Victory cards (Estate, Duchy, and Province, worth 1, 3, and 6 points respectively). Since the end goal is to purchase victory point cards the general strategy consists of trying to create a deck that can efficiently purchase victory points each turn. Of course, since Victory cards have no purpose during gameplay having too many in your deck will dilute it, making it harder to get the good cards into your hand each turn causing the players to balance their victory card purchases carefully.

While the general gameplay is fairly simple, the variety in the cards makes the game very interesting. Players can use cards that allow them to play more actions creating intricate chains of cards. Through these chains players can build up a hand in a single turn to purchase high valued cards (such as the Province Victory Card) or trade in cards in their hands for higher valued cards from the Supply, for example. 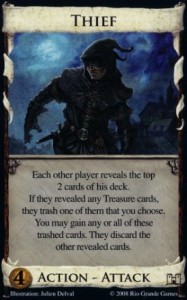 The core game consists of 25 different potential Kingdom cards to go in the supply, but only 10 different Kingdom cards are used in a single game. This means there are millions of potential combinations of cards, making each play different. There are suggested sets to use in the rulebook, but there is also a set of randomizer cards so that you can randomly choose which 10 cards to use each game. There are also many expansions available that add new Kingdom cards (and sometimes new rules) that will ensure that you never have a lack of variety.

The only complaint I have about Dominion is the lack of interaction with other players. There are a few “attack” cards that allow a player to do things such as steal cards from another player, force a player to discard cards from their hand or give other players curse cards (which are negative victory point cards), but for the core game there are only a couple of these cards so each player is mostly focused on himself the whole game. This is only a minor complaint though, as the game is still very fun.

One thing outside of the gameplay itself that should be noted is that the box for Dominion comes with a tray with dividers for all of the cards. As someone who is obsessed with keeping cards organized this is really awesome! It makes setup and cleanup much easier, and it keeps your cards safe. 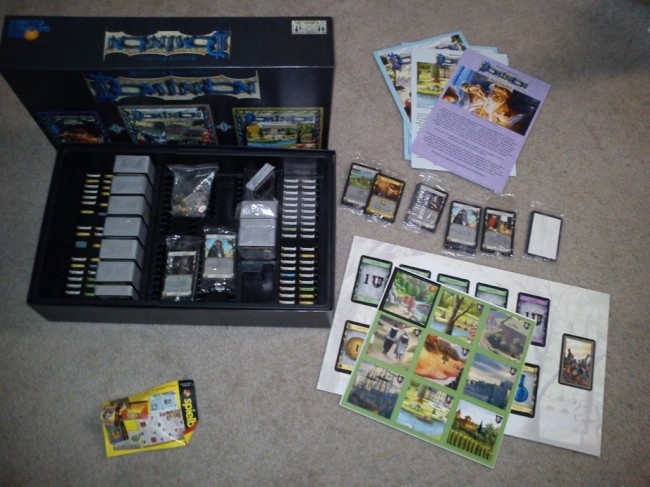 Keep an eye out because there will likely be several more reviews of deck-building games coming soon! Next up will be Nightfall which changes up the formula a bit with an intriguing chain mechanic and direct combat between players.


This entry was posted on Saturday, March 17th, 2012 at 3:29 pm and is filed under Board Games, Reviews. You can follow any responses to this entry through the RSS 2.0 feed. Both comments and pings are currently closed.

One Response to “Review: Dominion”