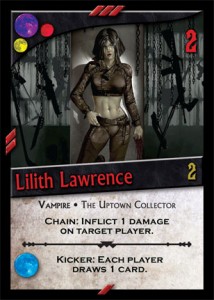 During the combat phase a player must attack with all of his minions, divided up amongst the other players as he wishes. The combat itself is fairly simple; the attacker chooses which minions are attacking each other player, defenders assigns minions to block each minion, damage is assigned to the defenders (defenders do not attack back), and then all attacking minions are discarded. Any undefended or excess damage goes to the defending player. Each point of damage dealt to a player causes that player to draw a wound card. Once all of the wound cards are depleted (there are 10 per player) the game is over and the player with the least amount of wounds is the winner. While wounds are not necessarily a good thing to have, the negative effects are somewhat negated by the wound effects on the cards. In the base set the only wound effect allows a player to discard wounds from his hand at the end of his turn and draw 2 cards to replace each wound discarded, meaning that players with too many wounds will not simply get left behind and in some cases it might even be beneficial to try and take a couple wounds for the extra card draw.

The other element that really makes Nightfall stand out is the chain system. Instead of having a single action to play each turn players instead are allowed to play a single chain. Each card in Nightfall has a colored moon in the upper left corner of the card and 2 smaller moons that denote what cards can be chained off of that card. During the chain (action) phase the player can start by playing any card from their hand. They may continue playing cards as long as that card’s colored moon matches the chain colors from the previously played card, creating a chain of cards. What is interesting is that after that player is finished playing cards the player to their left is allowed to then play cards chaining off of the last played card (and continuing this way until all players have had a chance to play on the current chain). 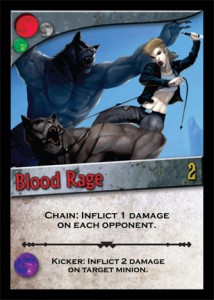 An action card has an effect in a chain and then is discarded.

Once all players have had a chance to play cards the chain is resolved in reverse order with the cards played last being resolved first. Cards have chain effects that take effect when they resolve that do all kinds of things from damaging minions or players to canceling other cards in the chain. In addition, many cards have a “kicker” effect that also occurs if the card they are chained from is of a specific color. If the card is a minion it then enters play and stays in play until it attacks at the beginning of the owner’s next turn. Since the chain phase comes after the combat phase minions played on a player’s turn are around for a full round to defend before they attack and are discarded at the beginning of the player’s next turn. Also, since players can chain off of another player’s chain they are able to bring in minions during another player’s turn. This creates a very interesting and strategic setup in which players have to decide when it is best to player a card into a chain, and how best to chain their cards together.

The buy phase is also different. Nightfall does not include any money cards. Instead, all players receive 2 influence (the currency used to purchase new cards) every and they may discard cards from their hand for 1 influence each. There is at least 1 card that gives the player a bonus to influence when played in a chain as well. This means that even if a player has a card in his hand that he does not want to play or is not very useful for the current situation he can turn it into something useful. Players do not discard their hands at the end of the turn however, so there is an advantage to not discarding all excess cards for influence each turn. 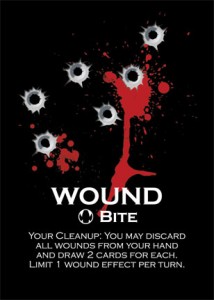 All of these elements combined together make Nightfall a very unique deck-building experience. Nightfall is currently not only one of my favorite deck-building games but one of my favorite games of any genre! The base game comes with 24 unique card types giving plenty of variety and replayability when you consider the combinations possible with these cards in the common and private archives. There are also 3 expansions available currently (Blood Country, Martial Law, and The Coldest War) that add plenty of new cards to play with, including new wound types and more variety in potential chain combinations.

Keep an eye out for more deck-building game reviews coming soon, including a review of the Nightfall: The Coldest War stand-alone expansion as well! The Coldest War adds not only new archive cards but new starting minion options, new wound types, and an interesting new game mechanic, moon phases.


This entry was posted on Saturday, March 24th, 2012 at 5:44 pm and is filed under Board Games, Reviews. You can follow any responses to this entry through the RSS 2.0 feed. Both comments and pings are currently closed.