Posted in Miniatures on May 7th, 2009 by tewfik

Here are 3 of my current WIP’s

END_OF_DOCUMENT_TOKEN_TO_BE_REPLACED

Posted in Miniatures on May 4th, 2009 by tewfik

Sorry that i have been slacking on the Picture taking/cropping and posting… BUT!!

I finally got around to taking pictures of my Skaven to show what Svenn gets to deal with.

These models were painted about 6 years ago or so, some still are not complete others are complete and could use some ‘fixing’ but will most likely stay the way they are because i enjoy seeing the phases that my painting skill has gone through over the years.

END_OF_DOCUMENT_TOKEN_TO_BE_REPLACED 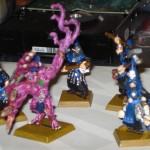