Nightfall is a deck-building game with several unique elements for a deck-building game. The first of which is the fact that Nightfall is a game of direct combat between players. At the beginning of every turn a player attacks with all of his minions in play before discarding them. Since the combat phase is the first phase any minions played on that turn last until the beginning of the player’s next turn, allowing them to be used for blocking in the meantime. Combat is generally pretty simple: assign attackers, declare defenders, and then assign damage. Any excess damage is dealt to a player in the form of Wound cards which enter the player’s deck, and the player with the least wound cards at the end of the game is the winner. However, when playing with multiple players it can be difficult to decide who to attack each turn. 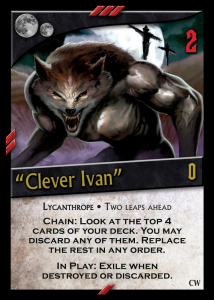 The other major element of Nightfall is the chain system. Unlike most deck-building games in which players may simply play 1 action (which will sometimes give the player more actions to spend) the player may play a single chain. Each card has a large moon in the upper left corner, and two smaller moons beneath that. Each of those moons is of a specific color. The larger moon is the color of that card and the smaller colors are the colors that may be chained from that card. During the chain phase a player plays any card to start and then may continue to chain cards (as long as the large moon on the new card matches the smaller moons of the last played card) as long as he wishes. After the current player is done the player to his left may chain off of the last played card and so on until each player has had a chance to play cards, meaning every player has a chance to play cards on every player’s turn. Once the chain is finished all cards are resolved in reverse order. This leads to some very interesting outcomes, especially since some cards can alter or remove other cards in the chain.

Since there are no money cards the buy phase plays out different than most deck-building games as well. A player receives 2 influence (the currency used to purchase new cards) each turn and may receive additional influence by discarding cards from his hand. On top of this unique way of handling buying cards each player also has 2 private archives from which only he may purchase cards in addition to the common archives from which all players may purchase cards. The private and common archives are chosen in a draft at the beginning of the game, allowing the players to start planning their strategy before the game has even technically started. 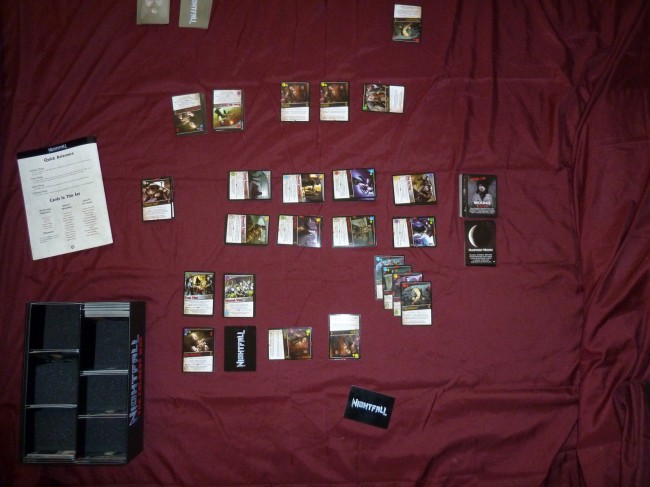 A 2 Player Game in Progress, with Chain Events and Damaged Enemies!

All of the above are core mechanics and are true of the base game as well as The Coldest War. However, there is a completely new element introduced with this expansion as well, moon phases. There are 6 moon phase cards that make up a special deck. At the start of the game these are shuffled and one card is placed face up on top of the moon deck. Each card has a unique effect that changes the game while it is in play, such as increasing the strength of Lycanthropes by 2 or making all cards resolve their kickers when played. At the end of each player’s turn he may choose to leave the current moon phase or change it (either by placing the current card on the bottom and flipping the next card or shuffling the cards and flipping the top one).

One of the New Moon Cards

This adds a new strategic level to the game in which a player can plan certain plays around these moon phases (such as throwing all his Lycanthropes into play to try and take advantage of the moon phase, or changing the order in which a chain is played since the requirements do not need to be met to activate kickers). However, these do not always have a huge effect and you will find that sometimes the moon cards are ignored or that you will cycle through repeatedly without much coming out of it. Still, they are a welcome addition that can create some crazy and unexpected scenarios on occasion.

There are also a few card effects that did not appear in the base game, but did appear in previous expansions. Some cards include a “Combat” effect which allows the player to discard that card from their hand during combat for a special effect (such as a bonus to strength). This leads to some more interesting combat scenarios than the base game. The only other card prior to this expansion that included this effect is the Martial Law Wound card. The other effect that appears very rarely in this set is the “Feed” effect. A card that includes “Feed” may repeat an effect as many times as they can afford to pay the feed cost (such as discarding cards from their hand). This can be very powerful if the player is able to repeatedly pay the cost. These two effects make for some interesting new strategic options compared to the base game.

The thing that actually was very exciting to me was the introduction of new starter cards. While these are still 6 sets of 2 cards (one set for each color) they have very different effects than the base starter minions. If you have both the base game and The Coldest War you can use either set or you can allow players to put together their own starter decks picking any 2 minions of each color to build a custom 12 card deck to start with. Being such a huge fan of customization I really like being able to build my own starter deck. 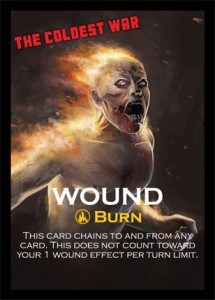 The final difference from the base game is the inclusion of three different wound types. Included are the wounds from the base game, the wounds from Martial Law, and a new wound type unique to this expansion. This new wound may be played in a chain, and chains to and from any color card. Using one of these wounds you can bridge that gap between two cards in your hand to keep a chain going. This also does not count towards the one wound effect per turn, so you may still use the old wound cards after using one of these new ones in a chain. On top of this, the wound cards have new art instead of the simple bullet hole art used with previous sets. Unfortunately this art is based around the Bite, Bleed, or Burn types which caused some confusion among the players I played with when two cards with the same art had different effects while another card with different art had the same effect, but this is really only a minor gripe.

Overall this has turned out to be a very good standalone game and expansion, though it adds a bit of complexity (which some players, such as myself, will appreciate and other players will not). If you already own Nightfall and are looking to add more or if Nightfall sounds intriguing to you and you are already familiar with deck-building games I definitely recommend picking up The Coldest War as it has plenty to offer. If you have never played a deck-building game before or do not enjoy too much complexity I would recommend purchasing the base Nightfall game, and then perhaps looking to The Coldest War later as it can be overwhelming if you are not already familiar with the basics.


This entry was posted on Tuesday, March 27th, 2012 at 6:48 pm and is filed under Board Games, Reviews. You can follow any responses to this entry through the RSS 2.0 feed. Both comments and pings are currently closed.

One Response to “Review: Nightfall: The Coldest War”