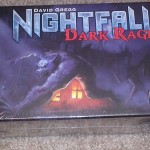 Since I have discovered Nightfall it has been one of the most played games in my collection. This month AEG has released yet another expansion, Nightfall: Dark Rages. Unlike The Coldest War, Dark Rages is a true expansion and not a standalone expansion so you will need a copy of the base game to play it. Since this is not standalone I will not be reviewing any of the base game features, so if you are not familiar with the game I recommend checking out our Nightfall review first.

So what do you get with this new expansion? You get 4 new cards of each color (2 action and 2 minion per color), 12 Avatar cards, and of course as with all Nightfall games you get draft cards and dividers for all of these cards. This set does not include wound cards or starter cards. I love having variety in my games so the new cards are always a welcome addition. There are a lot of interesting new cards in this set. The cards in this set build upon the rules from previous sets, and as such you will see a lot of Combat Effects (although there seem to be very few cards with Feed).

Perhaps the most interesting card in the set is the minion “Good Boy” whose special ability allows you to choose whether or not he attacks during your combat phase. If he does not attack he does not get discarded at the end of the combat phase, allowing him to become a permanent blocker. I have always been wary of attachment cards in Nightfall simply because minions are never around long enough to get much use out of them. While there are a few other minions out there that stick around for more than one turn they seem to be mostly be starter cards and only get one use per game so having a purchasable minion blocker gives you a good excuse to use more attachments. 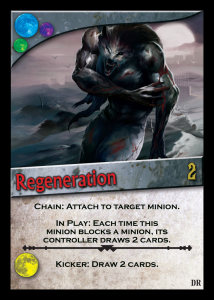 It’s a good thing too, because Dark Rages includes some interesting attachments as well. Regeneration, for example, allows the attached minion’s controller to draw 2 cards every time that minion blocks. Combine that with “Good Boy” for a blocker that also re-fills your hand. This set is full of interesting combinations like this but I’ll let you discover the rest for yourself.

The big new feature of this set, though, is the Avatar cards. Avatar cards are cards chosen before the game which include 2 always on effects (a positive effect and a negative effect) for that player for the duration of the game. This is an interesting new dimension to the game that allows players to specialize. Most of the Avatar cards will give a bonus to 2 of the minion types (Vampire, Lycanthrope, Ghouls, or Hunters) and a penalty for the other 2 minion types.

Before the archives draft the players hold an Avatar draft. All Avatar cards are dealt out evenly to players and, in typical draft style, players pick one to keep and pass the rest to the left until all Avatars are picked. The players then perform the normal archives draft. After all the archives are set up the players may then choose to any one of the Avatars they previously drafted to use, or choose to not use an Avatar at all. This setup works pretty well. It forces players to pick a diverse set of Avatars during the draft since they don’t know what types of cards will be appearing yet, but then allows the players to make a better informed decision as to which Avatar to actually use once they see what cards are available in the archives. 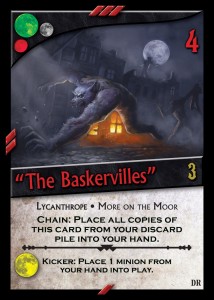 One of my favorite new minions

The Avatars themselves allow for a wide variety of specialized play styles that can definitely change the game. The Pack Alpha Dominate the Parasites Avatar, for example, has the positive effect “Your lycanthropes and vampires cannot be blocked by ghouls or hunters” and the negative effect “You cannot claim ghouls or hunters.” If you are looking for something that can seriously alter strategies then you will love Avatars as these 12 cards are all different and are pretty much guaranteed to shake things up a bit. I really like the fact that you can choose not to use any of your Avatars as well, giving you the freedom of using your normal strategies or specializing.

I do have one issue with Avatars, however. While I like that they included a beneficial and detrimental effect for each Avatar to try and balance it out, the fact that the archives are random can sometimes lead to an Avatar not having detrimental effects at all. The Pack Alpha Dominate the Rot Avatar has the negative effect of “When you place a hunter or vampire into play, inflict 1 damage on yourself” with the positive effect giving your lycanthropes and ghouls 1 additional strength. In a game with very few or no Hunter or Vampire cards this Avatar card is exceptionally powerful for the player using it. This is just a minor concern that can be somewhat mitigated through careful choices during the draft.

Overall, this expansion is well worth the $29.99 retail price. If you are a fan of Nightfall then it is likely worth the purchase for the new minion and action cards alone. When you add in the Avatars this is an expansion you will definitely want to add to your Nightfall collection.


This entry was posted on Thursday, June 21st, 2012 at 6:44 pm and is filed under Board Games, Reviews. You can follow any responses to this entry through the RSS 2.0 feed. Both comments and pings are currently closed.