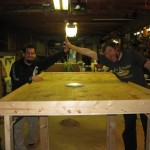 I just realized that as of a few days ago (April 19th) Tabletop Geeks is officially one year old! I realize that the posts go back to March of last year, but those were carried over from a different blog just to show off the table to some friends originally. Here is a recap of the last year as well as some information on what is to come.

I think we have really come a long way in just a year. We started with just a few posts showing off our table, which generated a lot of interest. Then we added pictures of our miniatures. From there we started expanding by adding the downloads section first which people really seemed to like, which lead to putting up terrain downloads. I decided with the success of the downloads that I would create the Roster Builder that I had wanted to do for some time. We started setting up interviews (which reminds me that I need to line up another interview). We managed to pull a lot of great interviews with not only prominent community members, but with the co-creator of Malifaux! After getting into Malifaux I wrote up my first game Review and put up a new Malifaux Downloads page.

As you’ve probably noticed, the Roster Builder is an ongoing work in progress. It’s been continually expanded to add more and more warbands and to support new rules. I will continue to expand on this adding more warbands and eventually allowing you to save and update warbands for a campaign. Another thing I have planned is to put up a page detailing how to create your own database files with your own house rules or custom warbands for the Roster Builder.

The other major feature planned for the site is to allow everyone to have their own personal Tabletop Geeks page with photo hosting. I know this has taken longer than expected, but I have both the code and the display theme ready now, I just need to integrate them and do some testing before I can put that up.

Of course you can also expect to see more of everything else as well… new interviews, more pictures of our works in progress, and more downloads if we find anything worth hosting. As always, if you have any suggestions or requests then please contact us.


This entry was posted on Friday, April 23rd, 2010 at 11:16 am and is filed under Site News. You can follow any responses to this entry through the RSS 2.0 feed. Both comments and pings are currently closed.

2 Responses to “One Year Anniversary”